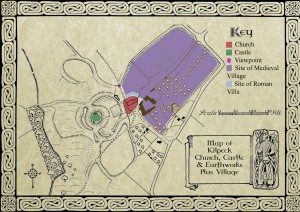 During the time of Herewald, one of the 27 churches in Ergyng included Lian Deui Cilpedec, which was consecrated during the time that William Fitz Osbern was Earl in Herefordshire between 1067 and 1071. (The castle was possibly constructed in wood in about 1090) It is presumed that this post-dated in 640 and may therefore have been of Saxon origins. Morcenau was inducted as priest, and after his death a son Enniaun was ordained in the days of Catgen Ddu, who, according to the domesday book survey, held Kilpeck before 1066.

There is no reference in the library at Aberystwyth to a church of St David connected with the great welsh saint, and it is generally assumed now that it was a local saint, though one book on the lives of British Saints accounts for three such dedications in Herefordshire, Much Dewchurch the mother church to nearby Little Dewchurch and Dewsall who all keep to the greater saint! In the 6th Century many grants of land were made by St Dubricius, possibly the first bishop of Llandaff, of land in Ergyng, to the seat of Llandaff where the liber landavensis records ‘be it known to all Christians dwelling in the south part of Britain, and especially between the Guy and the Towy (Wye and Towy) that Fasvu, son of Benjamin, hath given the church of Cilpedec into the hands of Bishop Grecielis ( bishop of Llandaff about 650) without any rent to early man and  free from all dues to those who dwell or for ever shall dwell and to all his successors in the church of saints Dubricius….’  In the 6th century St Dubricius presided over Ergyng, —  the church just down the road at St Devereux has his dedication — and there are many confirmed tales about him. It is possible there were much earlier roman settlers in the immediate area, and, though archaeologists will not accept it because there is no hard ground based evidence, dowsers have on numerous occasions ‘discovered and mapped’ a large roman courtyard just to the east of the church, and local folklore originally attested to this some time ago!  We are still waiting form sure confirmation! The large fortified medieval village to the east of the church has never been surveyed: the part to the right of the ‘church drive’ was ploughed up during the first world war and planted with fruit trees. That too is waiting proper investigation.

Between these many dates and about 1840, there are only a few sketchy details of the church’s history! The date of its building is uncertain, but likely to be about 1140. It is known that the church was given to St Peter’s Abbey, now Gloucester cathedral in 1134 so it appears likely that there was a church predating  the current one, and that would have had Saxon origins. This is not the space to discuss this possibility as it is fully described in the downloadable app. Just suffice it to know that there is definite Saxon work on the north side, {called Quoin’s} incorrectly called a buttress, what looks like evidence for a north door and, by a careful scrutiny of the solid walls between the nave and the chancel, it may be seen, because the nave side seems to be splayed outwards, that these may have been exterior walls at one time. Items from the Pye family history of the Mynde  –  they held Kilpeck from the 14th  century – has more on the Saxon possibilities.  See the longer article on the article pages in connection with the Pyes.  Much to speculate on!